The Cossacks are an ethnic and military order from the area of the Don river in what today is southern Russia / eastern Ukraine. They have been known for centuries, going back to the1400's and have developed a rich tradition and reputation as fierce and effective mounted troops. During WWII, starting in late 1942 and into summer of 1943, the Wehrmacht raised the 1st Cossack Cavalry Division, from captured Soviet Cossack units, deserters, as well as recruits from the occupied Don territories. In the summer of 1944, they were transferred into the Waffen SS and the 2nd Cossack Division was constituted and together with the 1st Division, they became the XV SS Cossack Cavalry Corps. It is arguable whether these troops were fighting for the Germans or against the Soviet regime which had oppressed them for almost 25 years. Most of these Cossack units saw action against partisan units in Croatia and Yugoslavia but they also fought as front line troops against the Soviets during the retreat from the eastern front. Outside of the battlefield, the Cossacks were also known for being unruly and ruthless, abusing the local population, sometimes as punishment, sometimes for amusement. Many of them were court-martialed by their German commanders, which is surprising given how brutal Germans themselves were against the locals. At the end of the war, they made their way west in order to surrender to the British, however they were later turned over to the Soviets who executed their leaders, and sent the rank and file to forced labor camps, where most of them perished. Only a few of them made it out alive when they were finally released after Stalin's death in 1953. 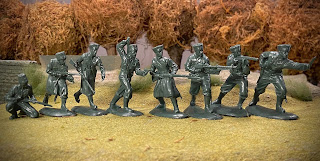 Mars German Don Cossacks
Extra points to Mars for addressing a set that had not received any attention (to my knowledge) before. The quality of the set is good overall. The figures come in decent action/fighting poses, with a nice degree of movement, and the sculpting keeps improving. Perhaps the one missing pose from  this set is a cavalry figure, maybe a mounted officer. The Cossacks in general, including the Don Cossacks, were renowned cavalry troops. I know that in WWII the role of mounted units in battle was negligible, however I suspect that in the role of the Don Cossacks, hunting down partisans, and chasing them around the woods and countryside, horses would have been useful.

Toy Soldier Guy
Toy soldier collector and WWII history enthusiast. My primary focus is 1:32 plastic figures and vehicles. I also enjoy modeling terrain and buildings to provide some background scenery for the figures.